a blog full of travel guides, photographs, and inspiration from my adventures near and far.

If you like the Mendocino Cove Bridge photo above, you can buy the digital print from my travel photos Etsy shop.

Since my arrival in San Francisco over two years ago, I’ve been hearing raving about the beauty of Mendocino. So, back in April of this year, I decided to make the trip for myself.

So, I rented a car with Getaround and made the three-hour drive.

My first stop in Mendocino was the Russian Gulch State Park. I had planned on doing a hike here (about an hour or so). But what I didn’t realize is that it’s actually a campground as well. So finding parking near the trailhead was difficult. I think I spent the first 20 minutes just driving around, trying to find a spot to park.

As I was heading out of the park, a little disappointed nonetheless, I decided that I wasn’t going to let the trip be a total failure. I was in Mendocino after all! There has to be a place I can stop and get a pretty picture.

Before the trip, as per usual, I had done my research. So I knew that there was a road near the entrance of the park that brought you down to a beach underneath a bridge. There has to be a cool photo down there, right? But I was having trouble finding it. So, I pulled over to ask for help. And to my surprise, I stumbled upon a lovely old man who made my Mendocino dreams come true. 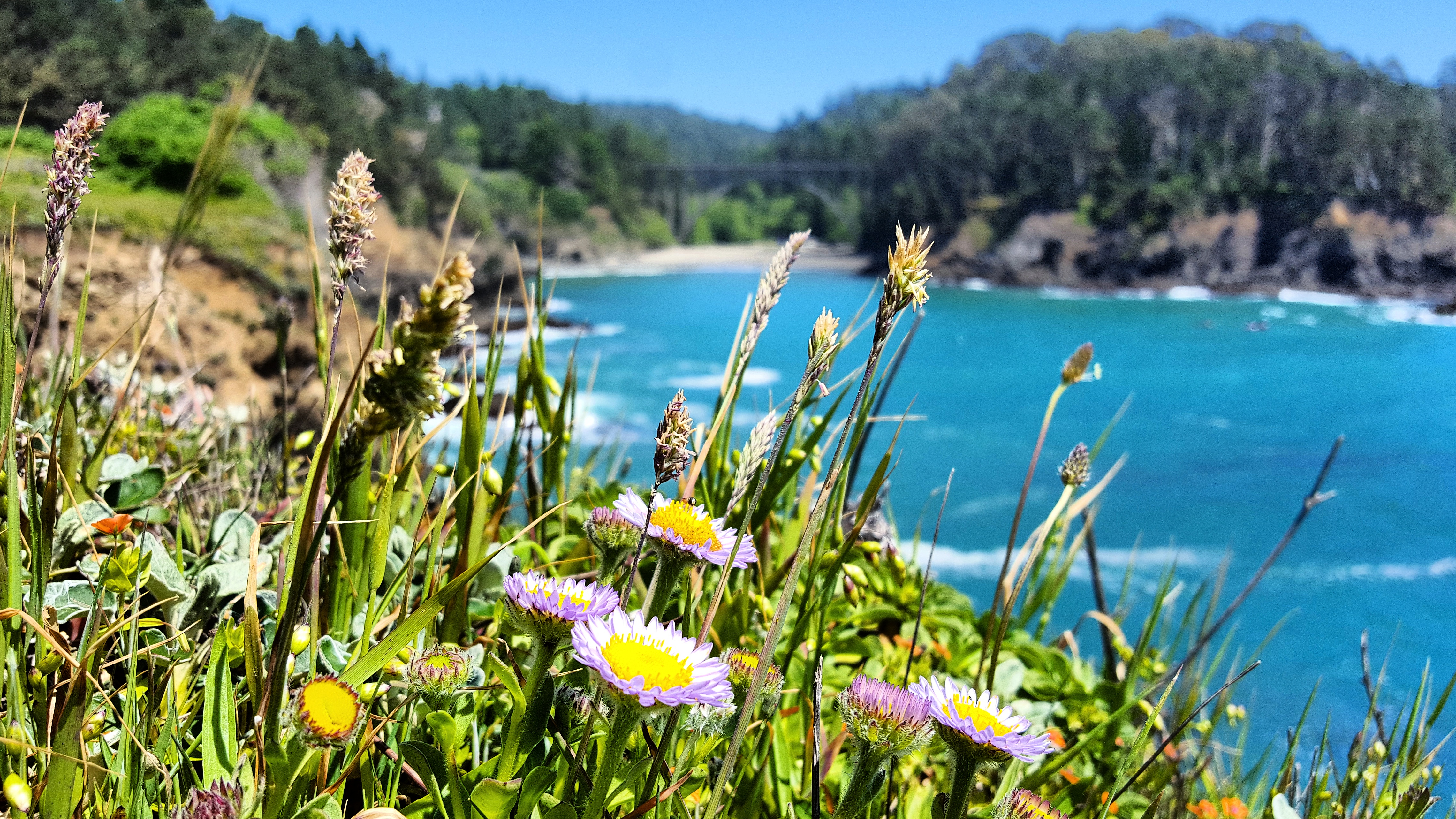 I told him I was searching for “the beach under the bridge”. Without hesitation, he asked me why I wanted to go there. I recall being slightly annoyed by this. It’s none of your business, I thought to myself. But instead, I said that I wanted to take some photos. And to my surprise, his face lit up! He said the I shouldn’t go to the beach. Instead, I should take a short trail out to a peninsula that gives you a view of the bridge (and said beach). He said that’s where all the National Geographic photographers go. And so that’s where I went.

He said the I shouldn’t go to the beach, but instead take a short trail out to a peninsula that gives you a view of the bridge (and said beach). He said that’s where all the National Geographic photographers go. And so that’s where I went. 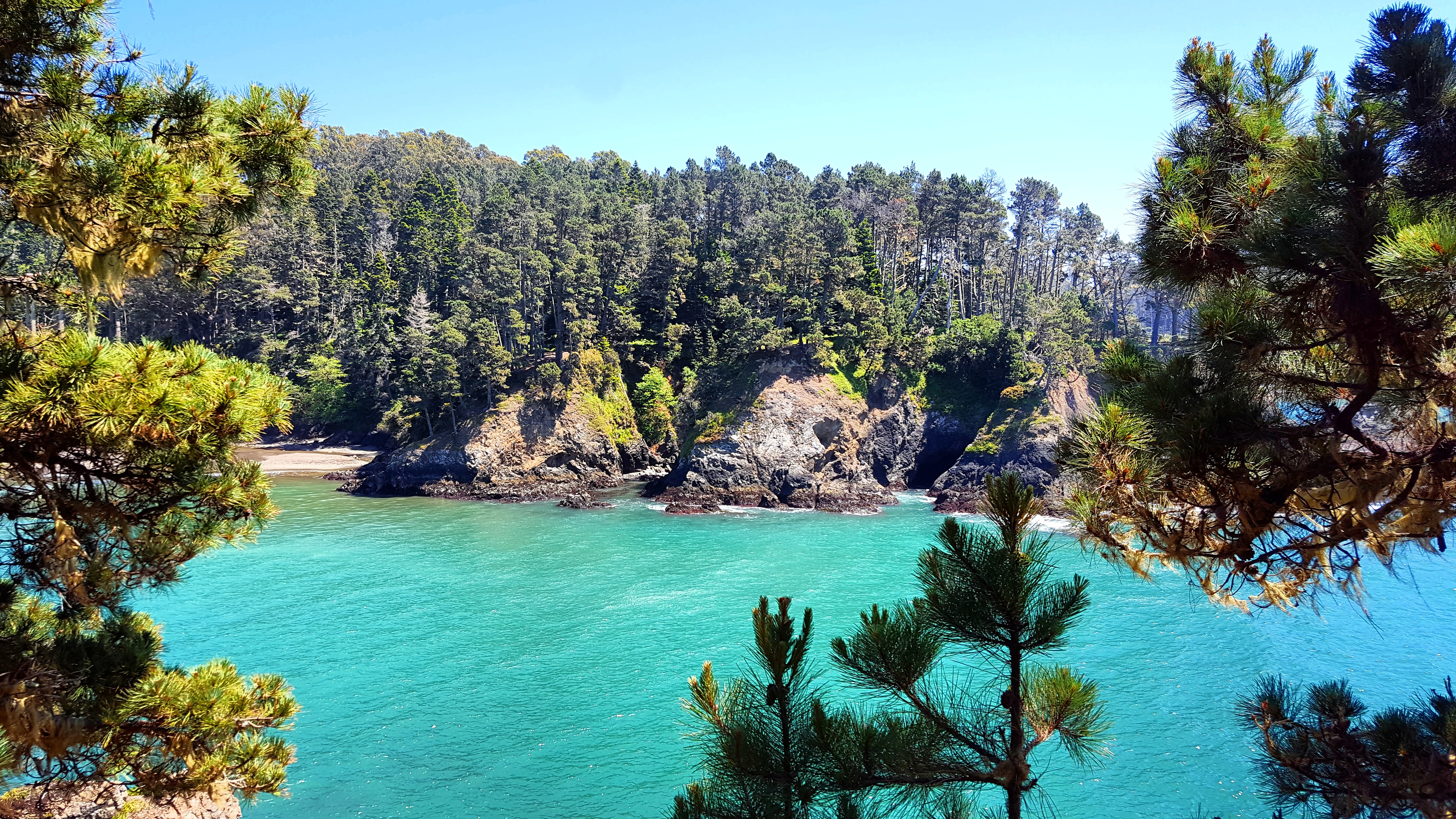 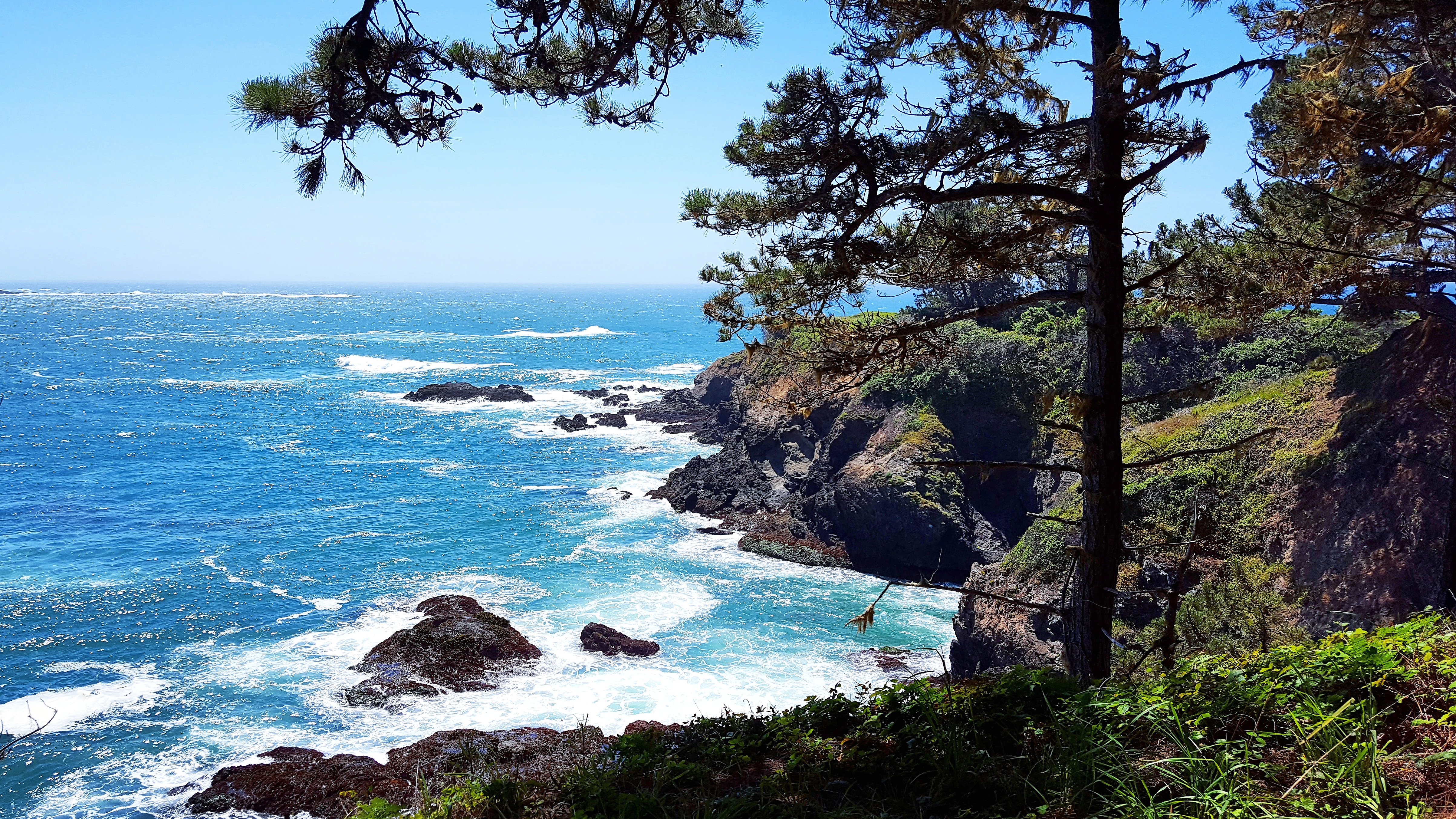 The trail out to the peninsula was lovely, of course, with its emerald blue water. I’d still say that might be one of my favorite colors. 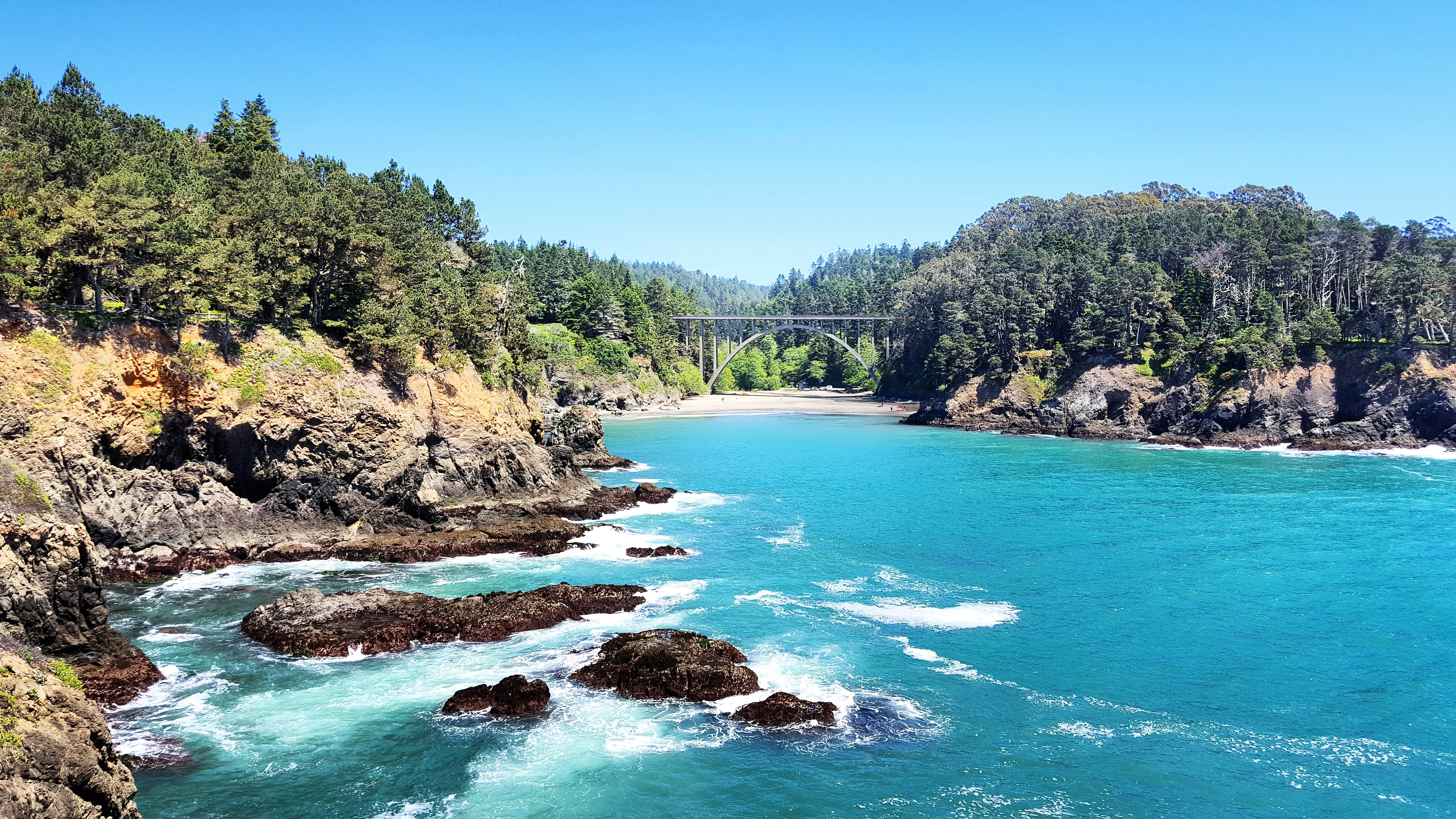 And my, oh, my, was he right. It was a spectacular view. If only I had a high-powered lens, to get up close and personal with that bridge. Alas, all I had was my little Samsung Galaxy S6. But hey, I think it did the trick.

After my awesome find at the Russian Gulch State Park, I perked up a little bit. So I jumped back into the car and rushed off to my next stop: Mendocino Headlands State Park.

It’s a little unassuming at first. But you’ll soon find a gorgeous array of rugged coastline and secluded beaches that surround the little village of Mendocino.

I didn’t have much time to explore, but I’m told there are miles of trails that wind along the cliffs. Of the little bits that I did see, my favorite view was of the sea arch and all the hidden grottos. 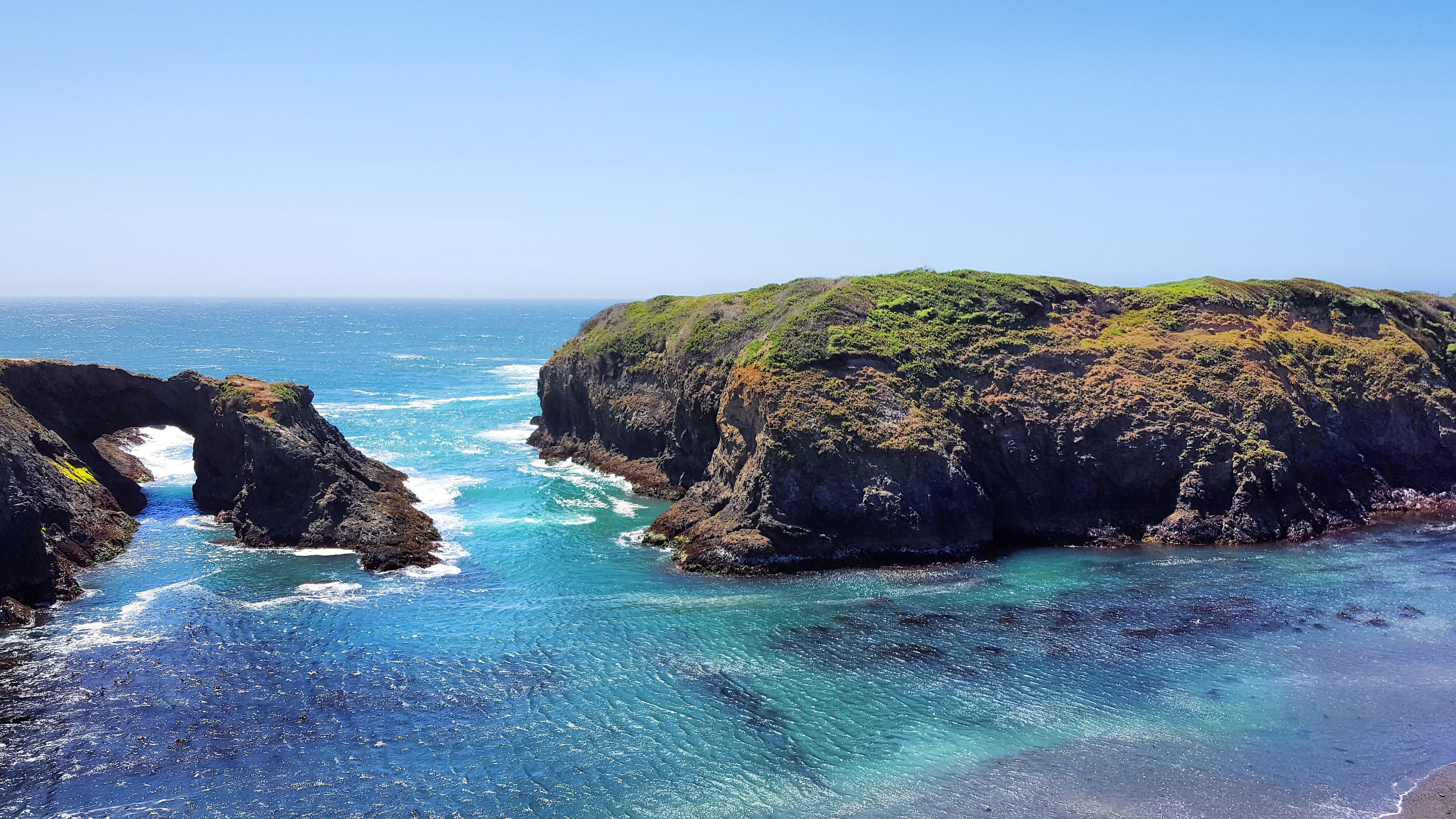 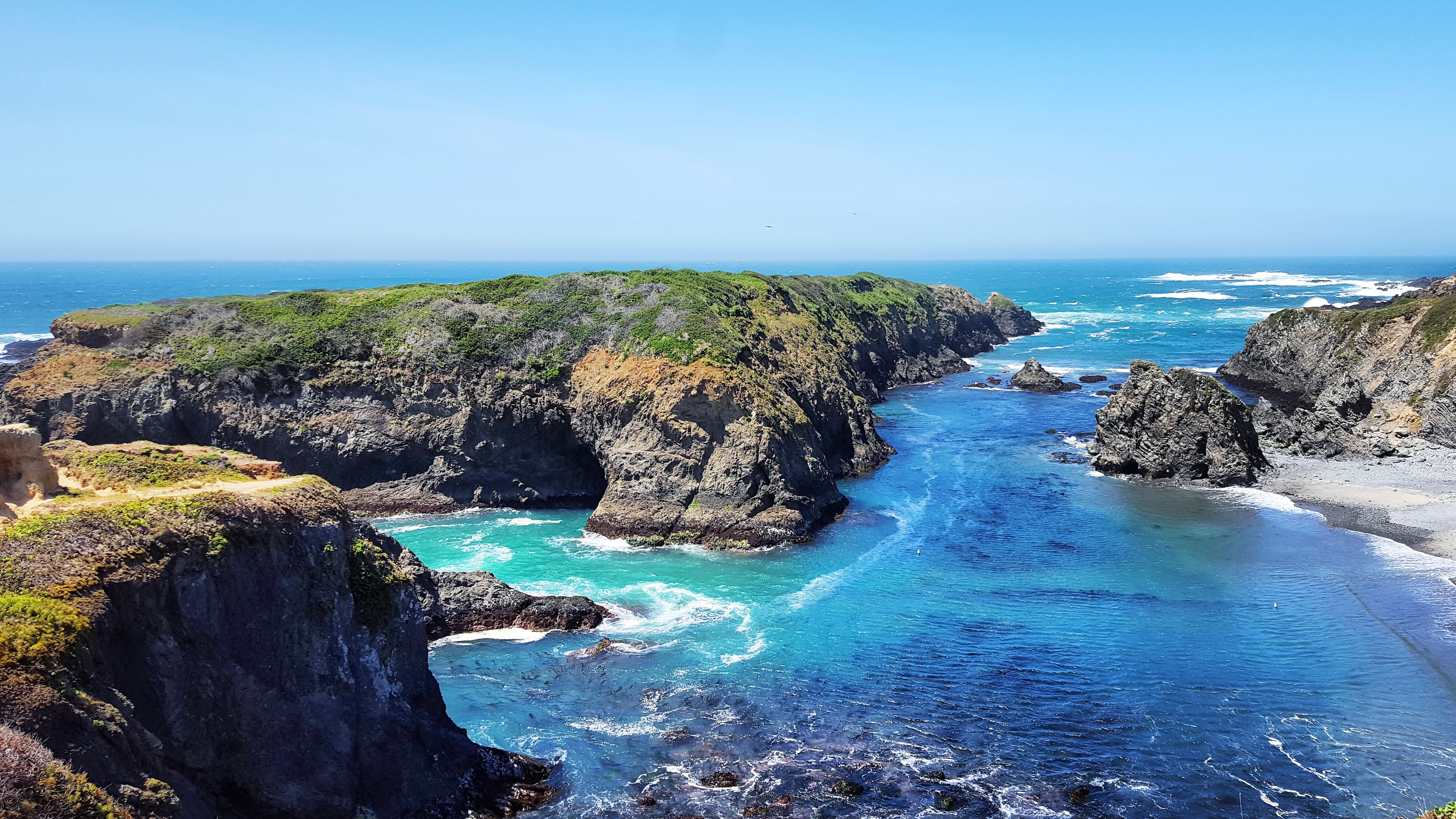 If you’re planning on exploring the headlands, definitely make sure to bring layers. It can get very windy. But outside of that, it’s such a beautiful spot. 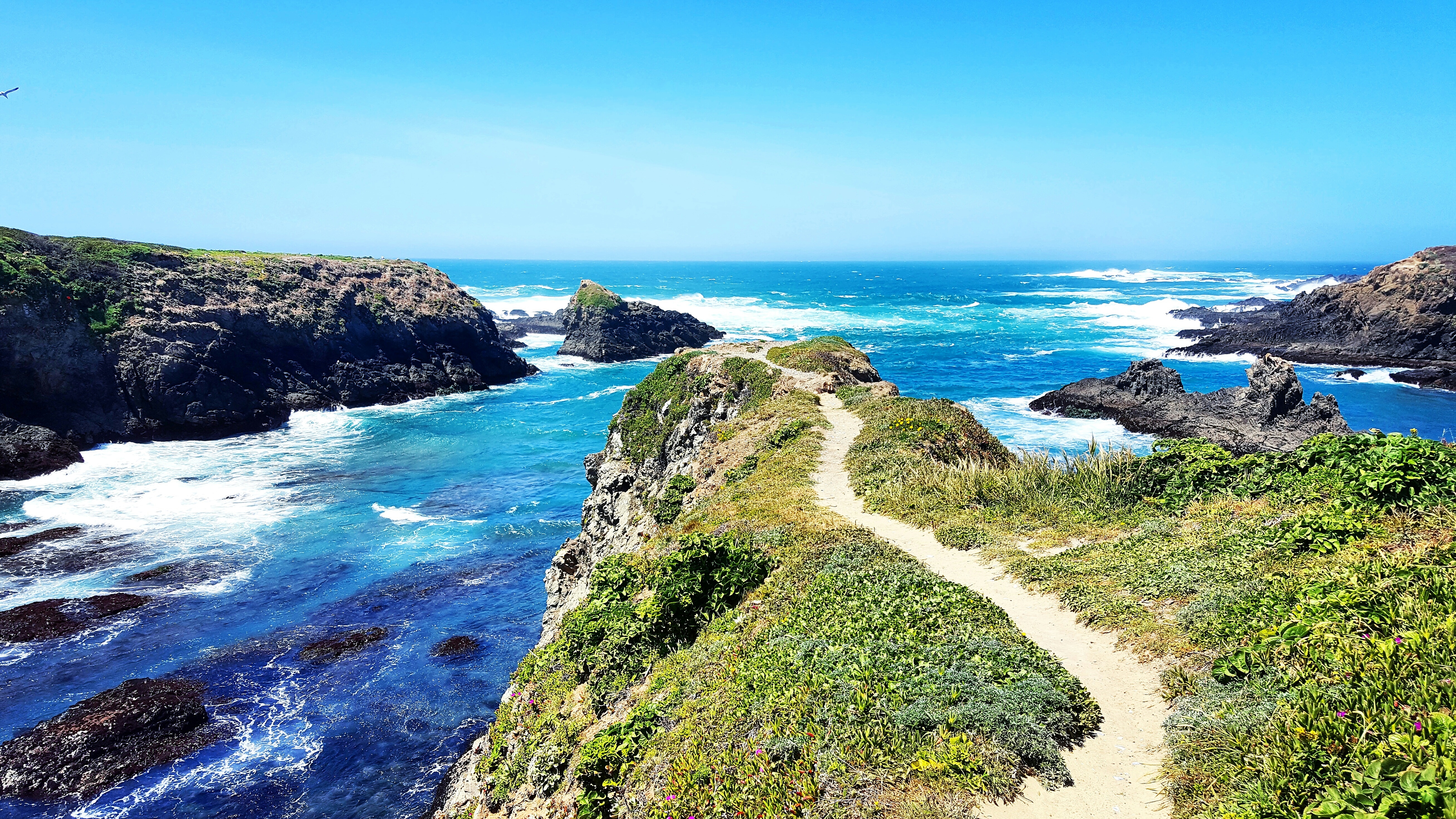 And with that said, I really need to make a trip back soon. I feel like my first trip was super quick and I can only imagine that there is SO much more to explore in Mendocino. Also, it’s a great spot for a romantic getaway. So just FYI if you’re looking for a weekend outside of the city with your S-O.

What did I miss? Tell me what you love about Mendocino in the comments section below.

All photos on this blog are mine. Feel free to share but please credit me with a link back to the blog. Much appreciated and thank you for your support!

One thought on “An Afternoon In Mendocino”

This site uses Akismet to reduce spam. Learn how your comment data is processed.

Signup today and get access to my FREE guide that will help you find unique places to visit while you travel.

All photos on this blog are mine. Feel free to share but please credit me with a link back to the blog. Much appreciated and thank you for your support!